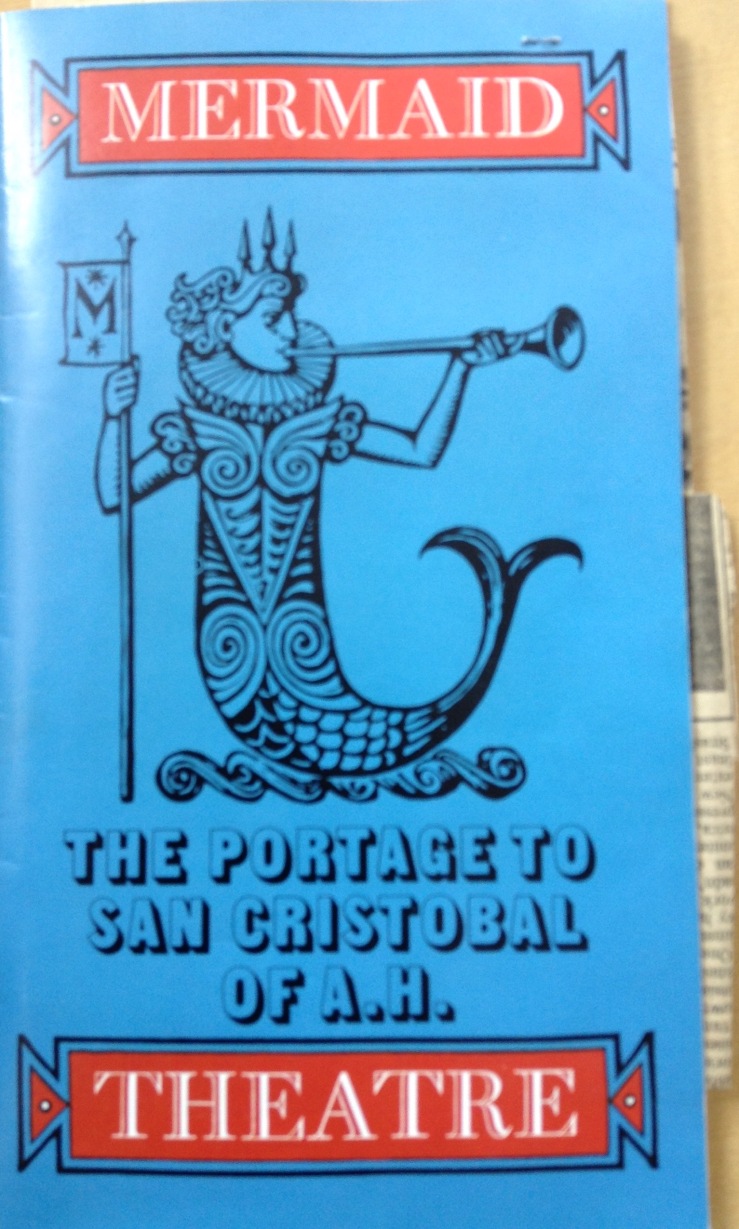 A couple of weeks ago, I spotted this programme on a shelf in the Research Room of the National Theatre Archive. Jennie, the Archive Assistant, explained that a former Trustee of the Theatre Royal, Norwich had donated her personal collection of theatre programmes from the 1980s – relating to shows at the National and at other theatres. This programme came from the Mermaid Theatre (built in 1959) and would not normally have been collected by the National Theatre.

But I recognised the title on the programme – The Portage to San Cristobal of A.H. This was a 1982 production designed by Jocelyn Herbert with Andrew Sanders. The play was written by Christopher Hampton, from the novel by George Steiner, and was directed by John Dexter. At the time, Dexter was Director of Productions at the Metropolitan Opera in New York, but had, according to The Times of 15 January 1982 ‘made no secret of the fact that he has been looking for a semi-permanent base in the non-lyric theatre to share his time’ (more of this article later). John Dexter and Jocelyn Herbert collaborated on many plays and operas, including The Life of Galileo at the National Theatre in 1980.

The catalogue suggested that there was already a copy of the programme in the Jocelyn Herbert Archive. So I brought up the three boxes of programmes (JHA/13) from the basement. They are divided into three categories: productions designed by Jocelyn Herbert, non-Herbert designed productions, and season programmes. As a note on the catalogue points out, the programmes are a valuable resource for considering ‘the changing nature of programme design and theatre marketing’. But they are also a record of an individual’s theatre-going, and provide a rare opportunity to supplement diaries and notes with evidence of the productions seen. Similarly, writer’s books, with all their marginalia, notes, underlinings and improvised bookmarks, can evoke the owner’s intellectual world. (Some of the ways that reading engendered writing for Beckett are explored in Samuel Beckett’s Library, an account of the 750 volumes of his surviving library.)

It’s rather moving to look through these slim booklets. Each must have evoked a memory for Herbert – some representing a fleeting acquaintance with a performance that nevertheless made a deep impression, while others give little visible hint of the months or years of discussion, planning, design and construction leading up to productions in which she was deeply involved. Some are beautifully simple – a printed sheet, folded – while others are full of photographs, on thick, glossy paper. A forty-year-old prospectus for lectures given by the Society for Theatre Research is  still tucked into one booklet. 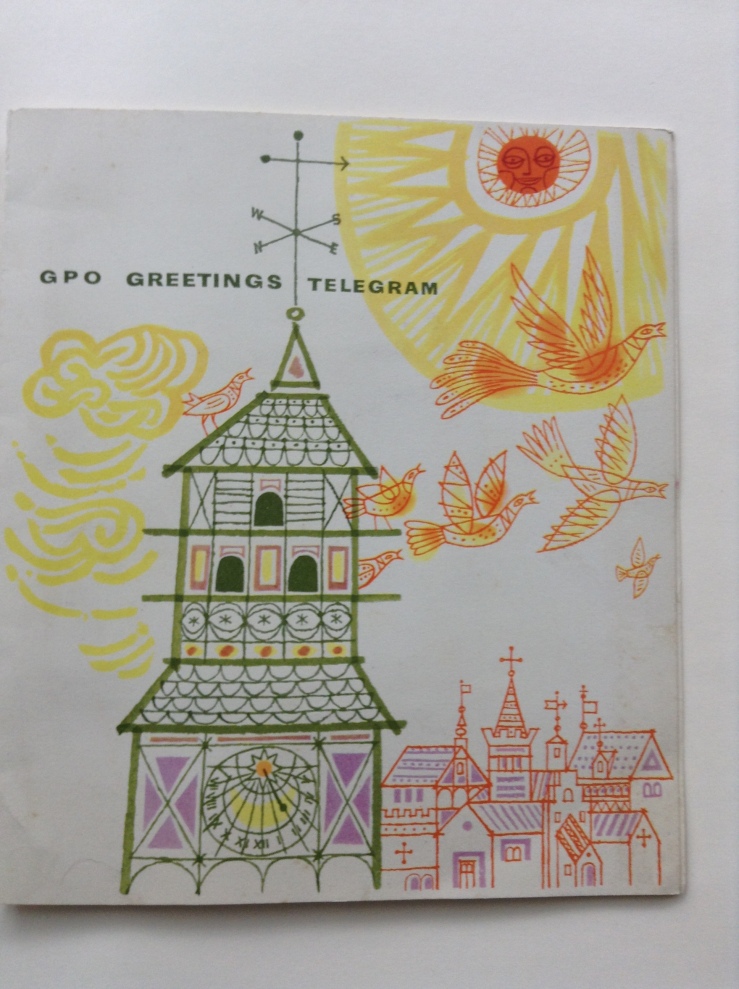 As well as the programmes collected by Jocelyn Herbert, the three boxes contain greeting telegrams for the first night of A Patriot for Me (1965) – from Penelope Gilliatt, John Osborne, Anthony Page and Vanessa Redgrave. These delightful communications, with the telegram tape glued onto greetings cards, were introduced in 1935, perhaps to soften the negative associations the telegram had acquired in the First World War. 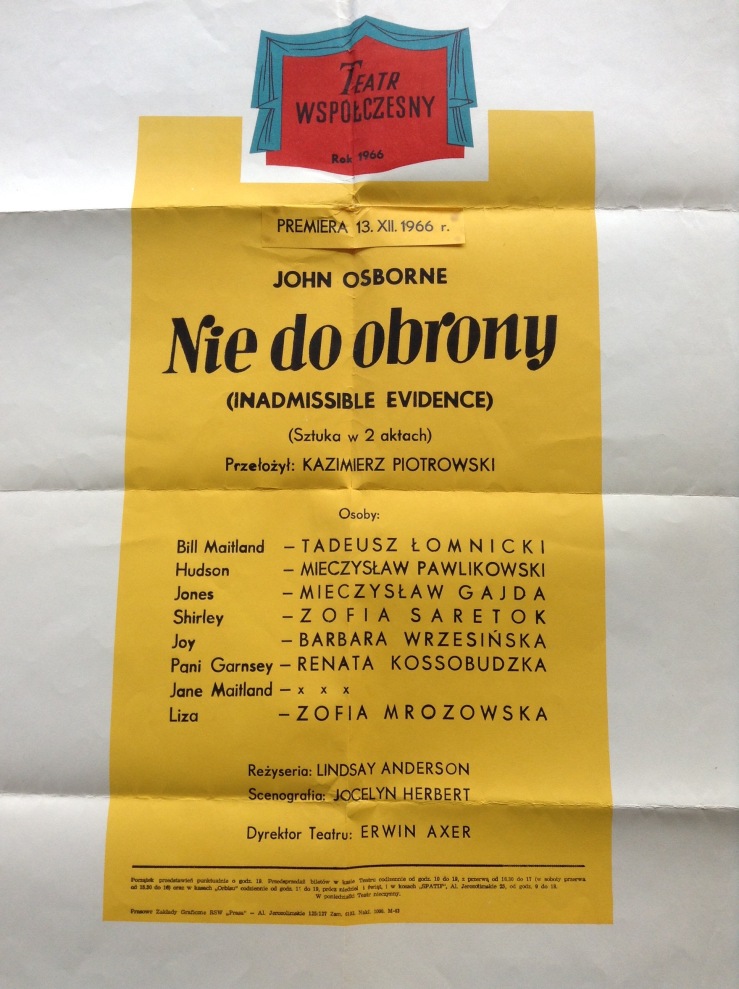 In the same box was a striking three-colour poster for a 1966 production of Inadmissable Evidence by John Osborne, directed by Lindsay Anderson at the Teatr Współczesny, Warsaw. The letterpress printing has left a deep impression on the reverse of the poster. Notes at the foot of the poster mention that tickets can be bought from the theatre (with its opening hours, including the obligatory przerwą – break), from the ORBIS travel bureau and from SPATIF, the ‘club’ for theatre and film artists: Stowarzyszenia Polskich Artystów Teatru i Filmu. The date is printed on a separate strip, neatly pasted over the original date, to move the PREMIERA from the 7.XII.1966 to the 13.XII.1966. This is the kind of ‘evidence’ that doesn’t necessarily appear in the digital record.

I’ll explore this collection of programmes further in later posts: the small format leaflets with bold graphic designs for the early productions that Herbert designed at the Royal Court, a substantial programme for Tadeusz Kantor’s Wielopole/Wielopole performed in Florence which includes translations of some of Kantor’s writings on theatre, and the many Berliner Ensemble programmes which testify to Herbert’s long connection with the company.

But among all these extraordinary documents, the one thing I didn’t find was a programme for The Portage to San Cristobal of A.H. So the next step will be to see if the donation from Norwich can be added to the Jocelyn Herbert Archive. 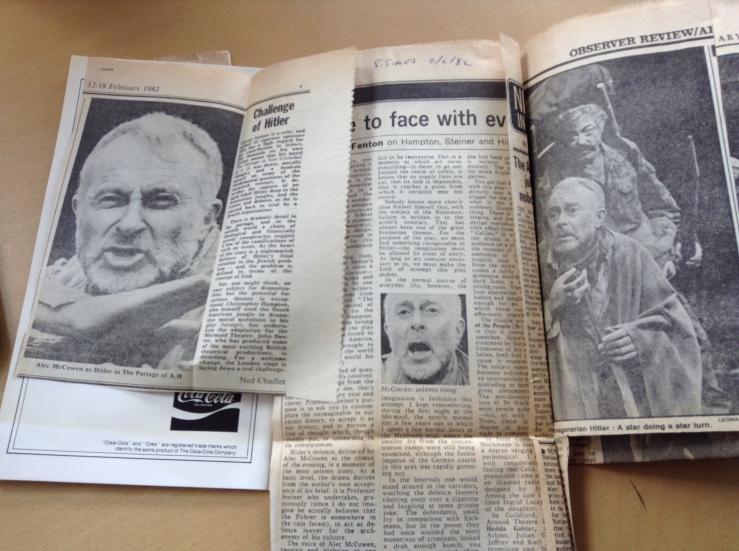 This donated programme differs in another way from the programmes for current shows, which usually come into the NT Archive as crisp, unopened copies. The little booklet for The Portage has a wodge of newspaper clippings stapled to its pages, or folded up and tucked inside: previews and reviews of the production from the Times, Telegraph, Standard, Observer, Sunday Times and Sunday Telegraph. This is an object that was inhabited by a passionate theatre-goer, who not only saved the record of her own experience, but seemingly engaged in a much wider conversation around the production.

What’s more, the reverse side of the newspaper clippings provides a context for the production, both political and theatrical. On the reverse of the item from the Times of 15 January 1982 is a picture captioned: ‘Polish troops, wearing gas masks, on duty in Gdansk: can the West really be blamed for events leading to Poland’s present troubles?’ The back of another clipping has a small item on a subject that was of great concern to me in 1982: ‘Pigeons are largely to blame for the decaying state of Colchester castle, according to a report considered by the town’s civic amenities committee yesterday’.

The back of another review has a list of productions playing at the same time: in January 1982, you could also have gone to see Season’s Greetings by Alan Ayckbourn, Quartermain’s Terms by Simon Gray, directed by Harold Pinter, Skirmishes by Catherine Hayes with Frances de la Tour, or The Second Mrs Tanqueray by Arthur W. Pinero: ‘A loving and long-overdue revival of the most famously unperformed work in the English repertory. Felicity Kendal presents a troubled human being instead of a monstre théatrale heroine…’

Finally, the production credits also represent a time capsule, mixing the elevated and everyday of 1982, with thanks (among others) to the Weiner Library, Flip of Curtain Street, E1 for military clothing, and the suppliers of Senior Service and Gauloise cigarettes.

One thought on “Travels in the archive: how a mermaid led to Poland, Italy and Berlin…”