‘Visiting the paint frame that first time had been like stepping back to another age, and Rex had suddenly seen the theatre not just as a building or a place, but also as a kind of machine for telling stories.’

Tony White’s novel opens with the police being summoned to the fictional ‘Royal Palace Theatre’ on Drury Lane. At the back of the theatre is the workshop containing the paint frame. White gives an evocative description of a tall, narrow space with skylights above, ‘workbenches laden with tins and rags and brushes of all shapes and sizes’, the paint-spattered radio permanently tuned to Radio 3, and the floor ‘a Jackson Pollock-like accretion of splashes and drips’. Most importantly, running down either side were the frames: ‘enormous wooden constructions that must each have weighed a couple of tons or more, grids of blackened and paint-spattered beams and struts across which would be stretched the gauzes themselves, ready for painting.’

The hero learns that with ‘a mere flick of the wrist’ the counterweighted frames can be raised or sent plummeting down into a deep slot in the floor. (Read a sample chapter here.) 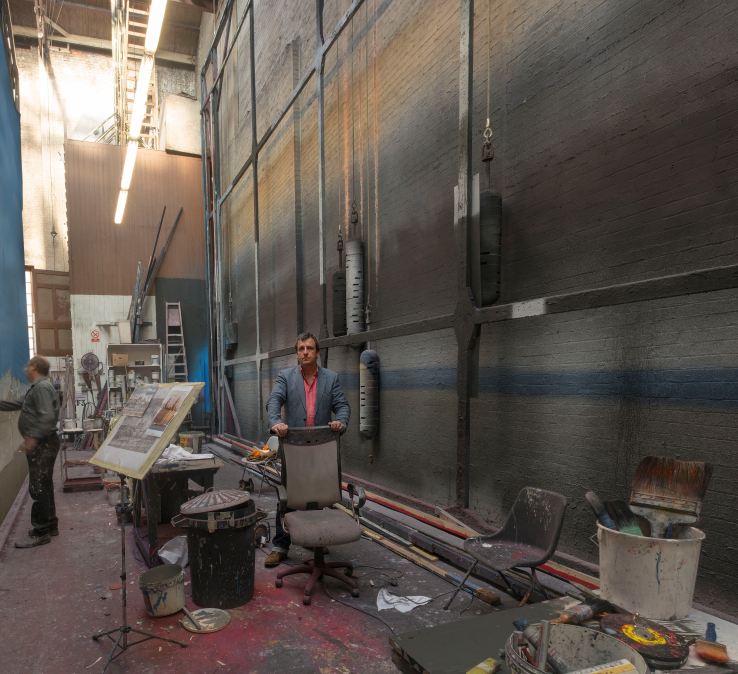 Tony White based his description on the paint frame at the Theatre Royal, one of just a handful of surviving examples of this technology.

The purpose-built scene-painting workshop in Walworth known as Harker’s Studios is named after Joseph Harker (1855-1927), one of the most important theatrical scene painters of his day, who made his reputation through his designs for Henry Irving’s productions at the Lyceum. Later, backcloths were painted here for many London theatre and opera companies. Designs by Rex Whistler and John Piper were painted at the studios; David Hockney painted a cloth for Glyndebourne Opera here. Below is a drawing by the playwright David Storey. It was the title page in the programme for his play In Celebration (1969) and was also used on the front cloth, painted by Harkers Studios. 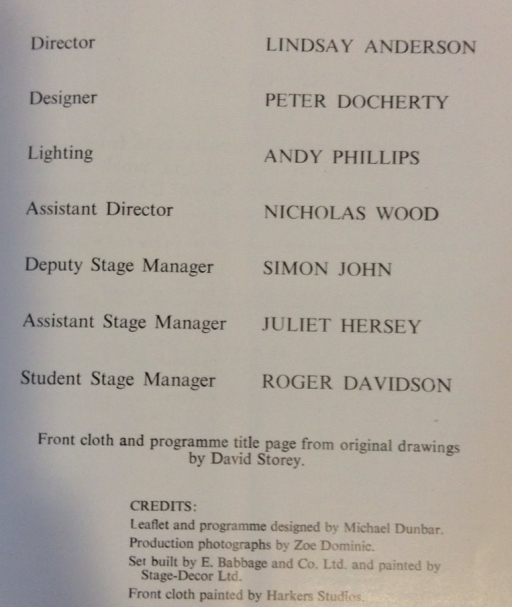 Until last year, Harkers Studio was home to Flints, the theatrical suppliers, with scenic artists using the workshop spaces above. Planning permission has been given to turn the listed building into flats and office space – a move opposed by the Walworth Society, the Victorian Society and the Theatres Trust. Scenic artists Grit Eckert and Sadeysa Greenaway-Bailey have been campaigning for it to remain in use, not only for its historical importance, but also to provide much-needed space for makers.

A beautiful account by the ‘Gentle Author’ of a visit to Harkers, including photographs of the building and a short Pathé film of Joseph Harker at work, can be found here . 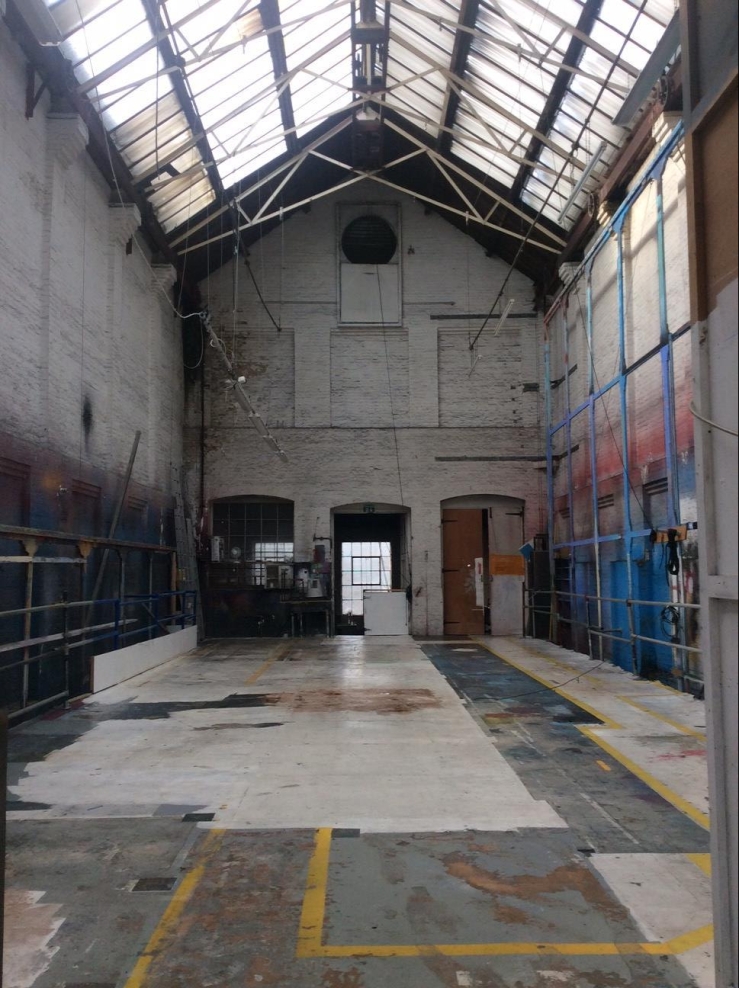 The Jocelyn Herbert Archive, now held the National Theatre Archive, is housed in the basement of the National Theatre Studio, itself converted from a purpose-built scenic workshop, the Old Vic Theatre Annex. The paint-frame and the machinery for its electric hoist system  were dismantled when the building was converted into rehearsal rooms and offices, but the 1958 building is listed as the only architect-designed theatre workshop in Britain. The three-storey wall thickly covered in paint still runs through the centre of the building.

Although some of Jocelyn Herbert’s designs were painted here, she originally trained in a different approach to scene-painting, with  the painter and stage designer Vladimir Polunin (1880-1957).  The ‘continental method’ of scene painting used the floor rather than a vertical paint frame. This horizontal method, says Polunin, allows for more variety in technique, ‘from the opaque colours of tempera and gouache to the transparent washes associated with water-colour’ without the risk of colour trickling down the canvas. It allows the artist to scan the whole canvas and work on any part of it without having to hoist and lower the frame. Polunin says that cloths painted by this method can be ‘folded like a pocket-handkerchief and dispatched all over the world in small cases’ whereas cloths painted on frames have thick priming and need to be rolled on tumblers to avoid cracking. 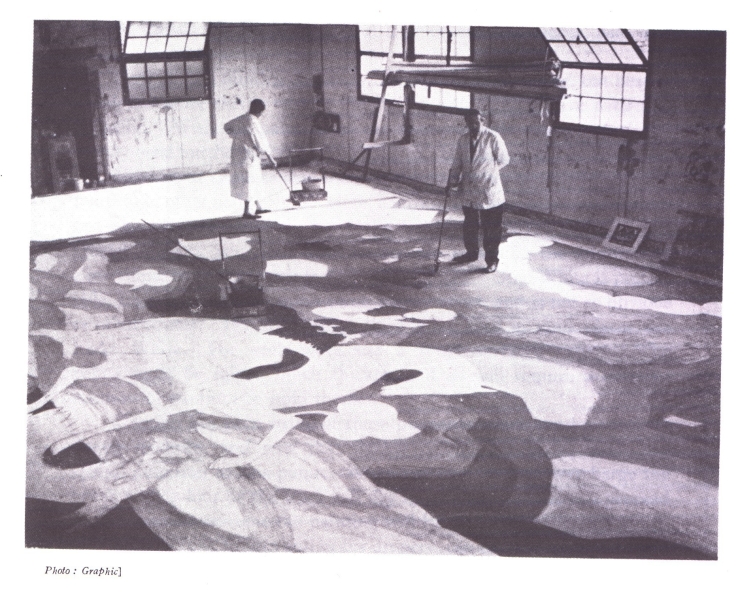 The first half of Polunin’s 1927 book The Continental Method of Scene Painting gives practical advice about preparing the canvas, primer and pigment.

‘In England drying takes much longer than on the Continent owing to the moisture in the air and the fireproofing in the canvas. In Paris a primed cloth will dry thoroughly in half a day in summer; in Monte Carlo in even less time. In England, during the winter period of fogs, a primed cloth may not dry for several days, hence heating and drying arrangements are necessary.’

The second half of the book reflects on Polunin’s experience painting scenery for Diaghilev and the Ballets Russes, working with Bakst, Matisse, Derain, Picasso and Braque. It’s a fascinating mixture of memoir, theatrical history and technical detail, and was reprinted by Dance Books in 1980.

Two friends of Jocelyn Herbert’s, who also studied with Polunin at the Slade, were the painters Annette Brinkworth and Mary Fedden. In an interview with Cathy Courtney, available on the British Library website, Mary talks about the ‘sparkling’, charismatic Polunin, and how they assisted him with the painting of a backcloth designed by Jacob Epstein.

The mask- and prop-maker Vicki Hallam, daughter of Annette Brinkworth, worked with Jocelyn Herbert on The Trackers of Oxyrhynchus. She recalled in an interview that its large papyrus backdrops were painted on the paint frame on The Cut. Jocelyn had painted an example for the scenic artists:

‘She’d done the painting first and then sprayed it with spattering. They did it the other way round.  I remember going to the paint frame with her at the studio, and she was wonderful, she said how beautiful it was, but… probably her mistake, but … could they do it with the painting first and the spraying second? And they were perfectly happy [to repaint it]. She did it in such a nice way that they were happy to do it. And it did make a difference, it was just a small thing. Jocelyn was a great diplomat.’

Vicki recalled the layout of the building when it contained workshops:

As you went in the front of the studio, there was a telephone desk, with all the plugs that you pull in and out: ‘just connecting’. And on my first day, Albert Finney opened the door for me, which was pretty amazing! You go down that corridor, there were the offices first, then there was Dominique’s room, the Head of Props, then the prop room. Beyond that was the armoury, which was at the end, Reg Amos was the armourer, and they made scabbards and swords and guns. Where the big rehearsal room is, that was the  carpenters’ shop which always smelt of horse glue because the first thing they did every morning was to turn on the glue, in the corner as you went in the door. Above the offices was Ivan Alderman who was the head of wardrobe and his gang of people. Above that, was the paint frame, run by Leslie Woolnough, and she was great.

When I brought my mum round to see where I worked, I showed her the paint frame and this amazing man came across: ‘Annette,’ he said, ‘What are you doing here?’ And he was a very old man called Roger Ramsdell who’d been painting when Mum was painting in the 40s, in the Old Vic! He was American and had been to America and worked on films and then came back.

Leslie Woolnough painted sets for the 1958 production of Henry VIII at the Old Vic – at Harker Studios, according to The London Stage 1950-1959: A Calendar of Productions, Performers, and Personnel, J.P. Wearing (p. 570). This must have been just before the Old Vic Annex came into use, since it also dates from 1958.

Tours of the National Theatre Studio are usually held during Open House weekend, or if you’re lucky, you might get a glimpse of the paint-frame wall when visiting the NT archive.

4 thoughts on “The paint frame and the floor”