Among the several hundred programmes in the Jocelyn Herbert archive there are a dozen from Berliner Ensemble productions between 1952 and 1967. It’s a small but richly rewarding resource, especially in terms of graphic design and changing ideas about what printed programmes might bring to the whole event of a theatrical performance.

In November, Brecht scholar Nicholas Jacobs came into the archive to look at the programmes. As a publisher, he has made significant books by and about Brecht available in English, including Brecht’s War Primer (photographs of World War II with accompanying short poems, translated and edited by John Willett, Libris 1998) and The Young Brecht (a memoir by Hanns Otto Münsterer, translated by Tom Kuhn and Karen Leeder, Libris 1998). He also organised the 1977 exhibition ‘Brecht in Britain’ – the first exhibition to be held in the new National Theatre building. This post is indebted to Nick’s translations and comments on the context of the performances, as well as to David Barnett’s 2015 book A History of the Berliner Ensemble.

Programmes produced by the Berliner Ensemble were ‘deliberately designed to be small enough to be carried in a pocket or a bag, and spectators were to be offered them when they bought their ticket, in advance of the performance’. As David Barnett comments, this ‘reflected a fundamental rethink of the way the elements of theatre could work together’. [Note 1]

The programmes are slim and small in format, just 10cm by 21cm. Many of them have distinctive foldouts with the design extending over four leaves. Two of the programmes, for Das Glockenspiel des Kreml (‘Kremlin Chimes’, 1952) and Winterschlacht (‘Battle in Winter’, 1954) were designed by graphic and photomontage artist John Heartfield and his brother Wieland Herzfelde.

The slim programmes are dense with contextual material, imagery and essays. At the Berliner Ensemble, compiling programmes was part of the work of a dramaturg. [Note 2]

The programme for the Berliner Ensemble production of J.M. Synge’s The Playboy of the Western World was jointly edited by assistant director Peter Voigt and director Peter Palitzsch, who had originally trained as a graphic designer.

It includes short essays and quotations on Ireland and the Abbey Theatre, Dublin, as well as photos of various ‘heroes’, from Mickey Spillane and Ernst Junger to the ‘Helden der Arbeit 1955’. These last are ‘heroes of labour’ – soldier, tractor driver, brewer, crankshaft turner. Another spread shows photographs of Hitler, alone and with an adoring crowd. The implication is that, like Christy Mahon, Hitler was ‘a “hero” who had been made by the people’. David Barnett notes that the programme’s ‘attempt at topicality’ was criticised, despite the production itself being very well received, perhaps because the production did not break the frame to comment on other instances of ‘heroism’. [Note 3]

Nicholas Jacobs drew attention to the aesthetic debate about ‘formalism’ in the programme for the Caucasian Chalk Circle (pictured below). The front curtain used by the Berliner Ensemble was decorated with Picasso’s drawing of the dove of peace. In 1954 the company adopted a new Picasso image for its publicity.

This image provoked much commentary and letters to the company of both support and criticism. In the early 1950s, in the ‘formalism’ debates, the first Minister for Culture in the GDR, Johannes R. Becher (a poet, and writer of the play Winterschlacht, staged by the BE in 1954) had condemmed experimental art that placed more weight on ‘form’ than content. Although this was no longer the official line by 1954, the ideas ‘reverberated beyond its lifespan in the popular, political imagination’, according to David Barnett, who finds a ‘sign of the BE’s newfound self-confidence’ in the fact that it printed these critical letters in the programme. [Note 4]

Six of the productions for which the Jocelyn Herbert Archive holds programmes were designed by Karl von Appen (1900-1981). 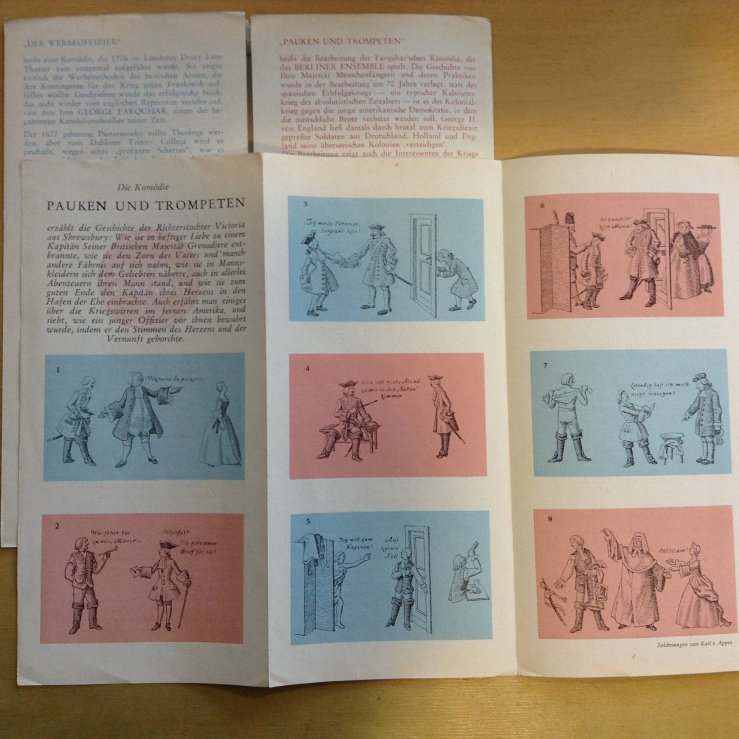 I particularly like the way Von Appen’s figures move across the page in the Katzgraben programme, accompanying an essay on the role of set design:

How did these programmes end up in the National Theatre Archive?

Jocelyn Herbert had a long association with the Berliner Ensemble, at first as an audience member and then as a friend and creative collaborator.

She first saw Brecht’s work in France: ‘I was in France and I heard that his company were playing in Paris and I got a bus up to Paris and went to see The Caucasian Chalk Circle […] And I thought I’d never seen anything as wonderful.’ [Note 5] This was in 1955 – the second Berliner Ensemble tour to Paris. The following year, Peggy Ashcroft, John Gielgud and George Devine of the English Stage Company brought the Berliner Ensemble to London for a three-week residency at the Palace Theatre. They played Mother Courage and Her Children, The Caucasian Chalk Circle and Pauken und Trompeten, in German, without surtitles. Herbert later said of Mother Courage:

The props the Berliner Ensemble used had a quality of reality and truth and ‘usedness’ about them which wasn’t just painted; it was actually worked on. Their clothes were marvellously padded, old, frayed and darned. The quality of all that was something I don’t think we’d ever seen in this country at all – our sort of breakdown was usually smearing paint on or cutting Cinderella rags. It was a lesson in a kind of perfection of truth, but it wasn’t naturalistic: Brecht never tried to pretend that you were not in a theatre, he always allowed the audience to see how the production was worked. (Courtney 1993, 106)

Soon afterwards, Herbert supervised the building of the set for The Good Woman of Setzuan at the Royal Court: ‘The production was designed by Teo Otto of the Berliner Ensemble, but he didn’t come over to England so we had to interpret his instructions’ (Courtney 1993, 19). She subsequently designed Brecht’s plays Baal (world première, 1963), Saint Joan of the Stockyards (1964), Mother Courage and her Children (1965), The Life of Galileo (1980) and, at the Metropolitan Opera in New York, the Brecht-Weill opera Rise and Fall of the City of Mahoganny (1979).

The full story of the Herbert’s friendships and exchanges with the Berliner Ensemble and its artists must be told another time, but I’ll end with an account from Lindsay Anderson’s diaries that gives a flavour of the Berliner Ensemble’s second visit to London in August 1965.

One day, Anderson and Herbert had lunch with directors Manfred Wekwerth and Matthias Langhoff and then went to Portobello Road so Herbert could ‘buy a Tiger’s Eye for Helene Weigel’. Anderson bought an LP of Scottish songs, having learned that Wekwerth was fond of ‘Auld Lang Syne’, and they listened to it at ‘the studio’ – Jocelyn Herbert and George Devine’s home. That evening, they escaped some dispiriting post-show drinks to go back to the studio. Anderson writes:

‘I stuffed my briefcase and pockets full of crab and smoked salmon sandwiches – then we beat it to the studio in a taxi. And what a nice party we had! Egg and bacon and The Trial of Lucullus which (BLESS them) they had given me; then singing and waltzing to our Scots record, and then we all sang ‘Auld Land Syne’. I felt so at ease: amongst fellow artists.’

When the taxi to take the visitors back to their hotel failed to turn up, Herbert drove them there herself. Anderson continues:

‘They invited us in for a drink – others were still sitting around in the bar. And we sang Mother Courage songs, and Hilmar [Thate] sang his Commune song – and ‘Auld Lang Syne’ again. Then out on the pavement and we all embraced with genuine emotion. I really miss them!’ [Note 6]

One thought on “Programmes from Berlin”